[dropcap]P[/dropcap]erhaps you have think of gathered all the supplies you can think of and are ready to bug out to the woods in order to survive a SHTF event or natural disaster. But there’s likely one thing you may not have taken into consideration during a SHTF or natural disaster event.

Wild animals that you may encounter in the wilderness or even along the roadway can really hinder your ability to survive. A SHTF event is chaotic and scary for humans but it can be even more terrifying for wild animals. Even the most timid of animals can be dangerous for you when they feel scared or cornered.

Many wild animals may be forced out of their comfort zone when SHTF, and this makes them more dangerous than ever for you. Animals that would otherwise be simply a nuisance, such as raccoons, flies, or mosquitoes can spell disaster if they devour your food supply or carry disease to your hideaway.

Knowing what to do when you cross paths with a wild animal, could be the difference between being injured and walking away unharmed. With that in mind, here are the critters to watch out for in the wilderness.

Predator Critters to Watch Out for in the Wilderness

Most predator animals aren’t really looking to take on a human. During normal times, an encounter with one of these predators will be rare because they’re out there looking for prey that is lower on the food chain than they are. They are primarily motivated to kill by hunger, but it’s important to know that many predators may attack a person if they feel trapped or threatened.

During a SHTF event or natural disaster, most wild and even domestic animals will be scared and pushed out of their comfort zone. Under these circumstances, encounters with predator animals could be more likely.  It will of course depend on which region you are in, but below are some of the predator critters to watch out for in the wilderness and some notes as to the best steps to take if you encounter one.

What to Do: The best thing strategy of course is to avoid an encounter with a predator animal if at all possible. Keep a fire near your campsite at night, travel in groups, watch for tracks or other signs predators are in the area and make enough noise that the predator animal hears you coming and goes the other way before you even see it.

In most cases, you do NOT want to try to run away from a predator animal. They are used to chasing their food so running from them is likely to frame you as prey in their mind. When possible, stand your ground with a predator, avoid direct eye contact, and make yourself look as large as possible.

The goal is to make the animal believe you are a threat and NOT prey. Stop and stand still. Talk to the animal firmly in a low voice, do what you can to seem larger than you are and then back away slowly.

Nuisance Critters to Watch Out for in Wilderness

Not all of the critters to watch out for in the wilderness are ones that can cause serious physical injury to humans. Many of the critters that we normally wouldn’t think twice about during regular times, could become a threat during a SHTF event or natural disaster however.

It’s frustrating when racoons or opossum get into our garbage can and knock it over but most days it’s an inconvenience, not a threat. But, in the wilderness, where you are relying on your limited food stores to get you through a set period of time, a racoon or opossum can be a threat to your survival. If you don’t take the proper precautions to store your food securely, some animals can and will get into it and devour it all, leaving you in a dire situation.

Other rodents and insects, such as squirrels, ants, and flies, while they may not devour your entire food supply, can introduce disease to your food by urinating, landing on, or tearing open sealed packages.

What to Do:  Always make sure that food at your campsite or other location is stored away securely at night and any time your campsite will be unattended for any period of time. Store food in coolers with tight fitting lids or in your vehicle whenever possible.

Get in the habit of doing a check of your campsite every night before bed to make sure every bit of food has been stored away. Dispose of garbage in a can with a tight fitting or locking lid.

Other Critters to Watch Out for in The Wilderness

There are also other creatures both large and small that you’ll need to watch out for in the wilderness. Some are rarer than others and will depend on the area where you live. But keep in mind that while some of these animals may be rarely encountered during normal times, all bets are off during a SHTF event or natural disaster.

Although moose and elk and even deer may not seem like a threat, they can certainly be dangerous, especially during mating season or in a SHTF or natural disaster where they feel threatened or cornered. These animals are powerful and can do serious damage with a swing of their antlers or a kick from their powerful hooves.

What to Do: Don’t approach a moose or elk calf. Where there is a baby, there is a mama with a protective nature. Move out of the way of male moose, elk, or deer if possible and continue on your way slowly. Watch for a lowered head, raised hair, or a moose that stops eating. These can be signals they are going to attack. If one chases you, climb a tree if possible or get on top of something.

One of the critters to watch out for in the wilderness, specifically in the southern states and the Midwestern United States is a feral hog. These basically look like an overgrown, hairy version of the domesticated pig that you may be more familiar with. But these hogs can be dangerous, especially if they are protecting young ones.

What to Do: If you encounter one of these feral hogs or wild boar, do not run. If you aren’t familiar with hunting these animals, don’t try to use a weapon against them, they are very thick skinned, and a failed attempt to harm them will only make them more aggressive. If possible step behind a tree or bush so that you are out of sight and wait for them to move on. If they charge at you, climb the tree or get on top of something.

Depending on the area you live in, another of the critters to watch out for in the wilderness are snakes. Most snakes will try to avoid you if they can hear you coming. Not all snakes are poisonous but many of them will bite if they are cornered or you get too close. Even a non-venomous snake bite can be a serious medical situation and even fatal if not properly treated. f you live in an area that is known for venomous snakes, make sure you carry anti-venom if possible or know how to get help quickly.

What to Do: The best thing to do is to always be aware of your surroundings and do your best to avoid snakes if at all possible. Take the time to learn to identify the snakes in your immediate area and how to determine a venomous snake from a non venomous one. If you do cross paths with a snake, the course of action is to simply leave it alone. Snakes won’t pursue humans and in most cases they won’t bite or strike unless they feel threatened. Water moccasins are one exception to the rule and can be particularly aggressive so move away quickly.

Most of us are used to dealing with the occasional bee, wasp, or hornet that gets into the house. Other than the risk of getting a painful sting, there isn’t much danger. But some of the critters to watch out for in the wilderness are wasps, hornets, and bees. In the wilderness, where there are fewer humans, it’s not uncommon to find huge nests on trees or in the ground. If you hit or step into one of these nests, you could be in for a world of hurt and even death from multiple stings.

What to Do: First and foremost, like with most other critters, try to avoid a confrontation with these flying pests. Pay attention to where you are walking and keep your eyes peeled for nests which could be in the ground under your feet or above your head in the trees.

If you accidentally step in or otherwise disturb a nest, avoid yelling and flailing or swatting at bees and run away quickly. For hornets and wasps, it’s important to stay calm. Do not run or flail around as they can sense movement. Cover your face and eyes and with your head down, walk away from the area slowly. If you are stung, remove any stinger still in your skin by scraping across it with a credit card edge or your fingernail. You can apply a baking soda paste to help draw out a stinger as well. Ice will reduce swelling and help with pain.

A Q-tip dipped in bleach and applied to the area will stop the pain instantly and will prevent the itching that usually follows. Always wear shoes and long pants in the woods and carry an epipen if you are allergic or are unsure if you are allergic to bees, hornets, or wasps.

So those are the 17 critters to watch out for in the wilderness. Did we miss an obvious critter that you’ll be watching out for the next time you venture into the woods? Have you had an encounter with any of the critters above? Share with us in the comments below and tell us what you did when confronted with one of these critters. 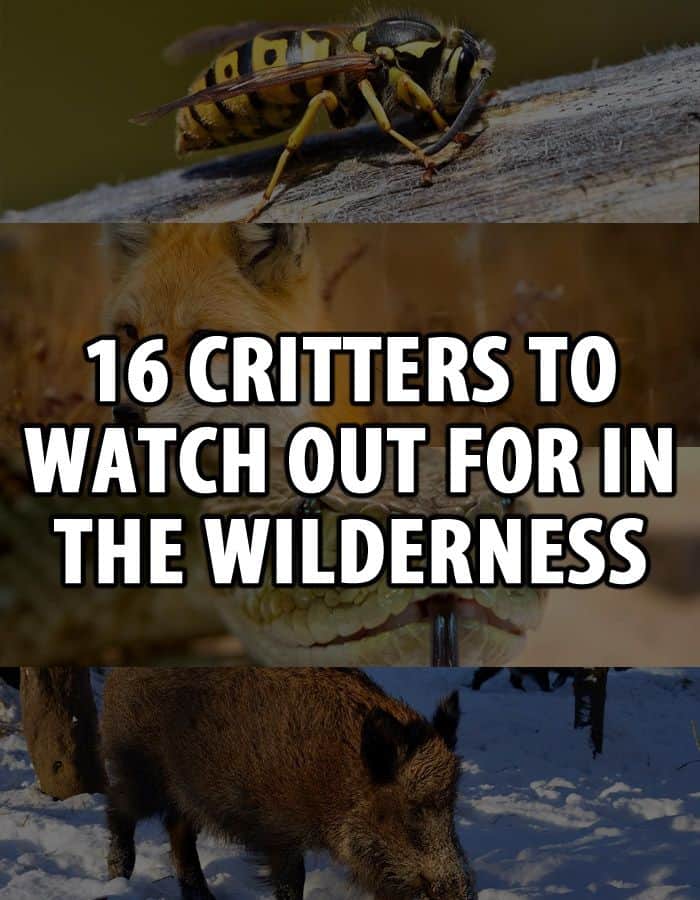 Born and raised in NE Ohio, with early memories that include grandpa teaching her to bait a hook and watching her mom, aunts, and grandmothers garden, sew, and can food, Megan is a true farm girl at heart.
For Megan, the 2003 blackout, the events of 911, and the increasing frequency of natural disasters like Hurricane Katrina, spurred a desire to be more prepared for whatever may come along. Soon to be living off-grid, this mother of four and grandmother of nine grandsons and one granddaughter, is learning everything she can about preparedness, basic survival, and self-sufficient homesteading. She is passionate about sharing that knowledge so that others can be increasingly prepared to protect their families.