12shares
When it comes to any wilderness survival situation, there is one potential danger for which many people are not prepared. I’m not talking about lawless bandits or some form of the plague; I’m talking about snakes. The last thing you want to do is prepare to survive in the wilderness, whether you had to bug out of the city during a pandemic or you are camping for a week in the bush, and then get bit by a snake and not know what to do.

Knowing your snakes is an incredibly important part of wilderness survival. Many snakes are perfectly safe, but there are many that are poisonous, so poisonous they can kill you. The further south you go, the more of an issue poisonous snakes will be. In this article, I will take you through the 10 most dangerous snakes on the US mainland and then discuss snake first aid, something that might one day save your life.

It is very fortunate that the Copperhead is known to have the weakest venom of the dangerous snakes because it is the snake that inflicts the most bites. This snake is known to freeze in place when spooked, rather than slithering away, which causes it to frequently get stepped on by hikers. Once it has been stepped on it will bite – guaranteed.

It is a good thing that the timber rattlesnake has a relatively mild temperament because its venom is some of the most potent there is. This snake is also capable of pumping a large amount of venom into its victim through very long fangs. Fortunately, the timber rattlesnake will give plenty of warning before striking and is very patient, so most people can get away before any serious injury occurs. 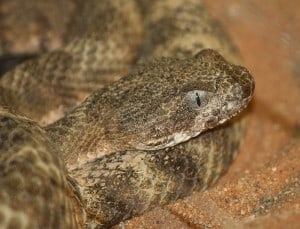 The tiger rattlesnake is named for its striped appearance and lives only within a small region close to the border between Arizona and New Mexico. It has the smallest head of any of the rattlesnakes and its venom is considered to be the most potent of all pit vipers. However, this snake does not pump out much venom in a single bite, making it less dangerous than some other snakes on our list. 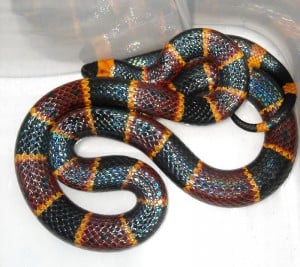 This snake has the potential to be very deadly, but actually poses only a small risk. The eastern coral snake is a recluse, which means it is rarely seen. In addition, when it does bite, it generally only injects a small amount of venom into its victim. But don’t be complacent around these snakes because with a big enough dose of venom, the victim can die within two hours of being bitten.

This snake is also known as a water moccasin and is the only snake that spends part of its time in the water. The cottonmouth can swim well and is found in bodies of water across the southeastern US. This is not a snake you want to mess with. They generally hide in the water and attack without warning and their venom is strong enough to eat away at the skin and flesh of its victim. It is common for bite victims to require amputation after being bit by a cottonmouth. 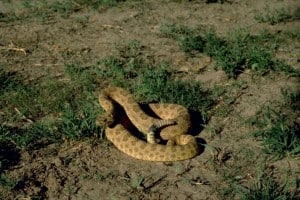 The prairie rattlesnake is one of the less harmful rattlesnakes, but that doesn’t mean it can’t be deadly. This rattlesnake can be found anywhere from southwestern Canada, through the entire western US, and into northern Mexico. One of the drawbacks of this rattlesnake is that its venom contains neurotoxins that pack a punch. 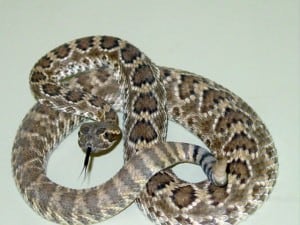 This rattlesnake has the most potent venom of all the rattlesnakes. The thing to know about being bitten by this snake is that at first the bite doesn’t seem too bad. But the venom has a delayed effect and over time blurred vision and respiratory failure will occur. Without treatment, the Mojave rattlesnake’s bite is nearly always fatal. 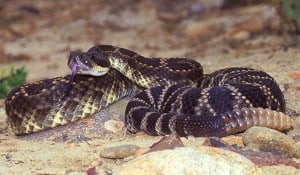 I’ll say right off the bat that diamondback rattlesnakes are the most dangerous of them all. There are seven subspecies of the black diamond rattlesnake that span from British Columbia throughout the western half of the US right to the Mexican border. These snakes have very potent venom that attacks the nerve endings. When bitten, an extra high dose of anti-venom is required to treat the victim. 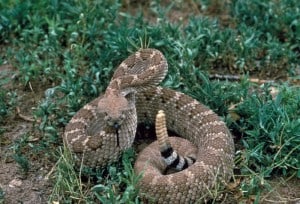 Unlike the tiger rattlesnake, which has potent venom, but doesn’t inject a lot into its victim, the western diamondback rattlesnake has weak venom, but pumps out a large volume of it when biting. The high volume of the venom pumped into a victim makes this rattlesnake one of the deadliest. 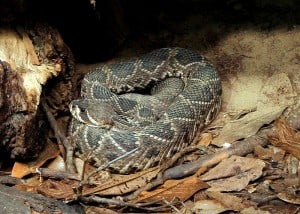 The eastern diamondback rattlesnake is the biggest of all the venomous snakes in North America and the most deadly of them all. In fact, this rattlesnake has the biggest fangs of any rattlesnake in the world. On top of this, this snake pumps out a lot of venom in a single bite and that venom is very potent. Those who are bitten can experience bleeding form the site of the bite and from the mouth and as many as 30% of the people who are bitten by this snake will die. That’s in our comfy, modern world. Imagine what it would be like getting bitten by this slithering beast post-collapse.

If you are bitten by a snake, you need to take that bite very seriously. Unless you are absolutely certain of what snake bit you and you know without a doubt that it wasn’t a venomous snake, you must assume it was. You have to seek treatment as quickly as possible when bitten by a snake. If you are close to civilization, then you will have a better chance of getting to a hospital and getting the anti-venom treatment you need quickly, but if you are in the bush or far from a hospital or other treatment facility, then you need to know what to do.

What Not to Do

Now that we have the do-NOTs out of the way, let’s talk about what you need to do when you or someone else gets bitten by a venomous snake. First and foremost, stay calm and get away from the snake. Be absolutely sure you are out of the striking range of the snake so that it cannot inflict another bite.

The next thing you must do is call for medical help. If you are able to get to a phone or use your cell phone, then call 911 (or whatever your local emergency number is) and ensure that help is on its way. While you are waiting for help to arrive, do the following:

Every venomous snake bite is unique because there are a number of factors that affect how serious a bit is. These factors include:

There are a few additional facts that are good to know when it comes to venomous snake bites:

Venomous snakes can be deadly. If you or someone you are with is bitten by a venomous snake or if you are not certain if the snake is venomous, then follow the instructions given above to ensure the best possible chance of survival and the least possible damage. Ultimately, you have to be on the lookout. Respect the snakes you see, give them their space, and enjoy your time in the wild.

The information in this article is provided “as is” and should not be mistaken  for or be a substitute for medical advice. Always consult your physician before trying any of the advice presented on this page. Always seek the help of a professional when delivering a baby.

An urban prepper and rural wannabe, Karen has been working as a freelance writer for a decade and prepping for about half that time. She has gathered a wealth of knowledge on preparing for SHTF, but there is always more to learn and she has a passion for gathering and sharing that knowledge with other like-minded folk. Karen lives in London, Canada with her two children and plethora of cats. In her spare time she is writing the next great apocalyptic novel of our time, full of government conspiracy and betrayal at every level.