The name Trench Cake doesn’t sound particularly appealing for a of fruit cake, but it got its name because it was eaten in the trenches during World War I.

Women at home had very little in the way of rations, and made do with what they had available in order to send a fruit cake for their husbands, sons, or boyfriends fighting on the various fronts.

Although a British ‘invention’ Trench cake has spread across the Atlantic to the US and become a staple for preppers.

During the war, hens’ eggs in Britain were expected to be sent to hospitals for the wounded soldiers rather than consumed at home, but there must have been a few eggs that went into cakes that were sent across the English Channel.

Now it appears that the postage cost of sending a cake up to 7lbs was 1 shilling and 4 pence but if the cake was above 7lbs it cost 1 shilling and 7 pence.

As you can imagine, most women would double or triple the ingredients to make sure a large cake was sent to make the most of the postage cost and feed the men, as a soldier could hardly eat his cake alone.

This record from the Ministry of Food in the National Archives gives a diary entry from the Mesopotamian Campaign when troops from Britain and India fought against the Ottoman Turks in the area now known as Iraq:

“Another day of fearful heat. Mail came in to relief of everyone. Had a lot of letters and parcels. On opening one found a 71b cake, a beauty, absolutely bad. The most awful disappointment imaginable. Buried it silently!” (p 28)

One can feel Lieutenant Lamb’s bitter disappointment at receiving a cake that had gone bad in the heat. Soldiers in Europe were better off, as the cakes didn’t have to travel so far!

The original recipe recommends leaving the cake to bake for two hours which may be a bit long.

Cooking time is considerably reduced as fan-assisted ovens are standard these days – most people who have made the British Ministry of Food’s recipe for Trench Cake seem to feel that one hour is sufficient. Back in the 1910’s, they didn’t have fan assisted ovens.

During wartime, it was difficult to get certain fresh ingredients so the recipe contained no eggs, and a combination of vinegar and baking soda were used to get the cake to rise.

You’ll notice currants were the only dried fruit included – no doubt they had plenty of those in Britain, but if you are making survival trench cake feel free to substitute the currants with raisins, sultanas or a dried fruit cake mix that is inexpensive and readily available, as sometimes the currants work out more expensive.

As preppers, you want to use what you have grown or foraged and dehydrated, or what is readily available in your stockpile (or fairly inexpensive to replace).

This is the basic Trench cake recipe, which makes a cake weighing just over a pound. Housewives would have made 6 times the amounts given below to make a close to 7 lb cake, like the one Lt. Lamb received, in order to get their value out of the postage charged.

You can find the first variation on the Shetland with Laurie Blog, while this recipe from the WEA Adult Education site is a variation from the one above as to how much spice should be included, as well as including lemon juice instead of lemon zest if preferred. It also seems there is a bit more milk than in the first recipe, and less currants and sugar. 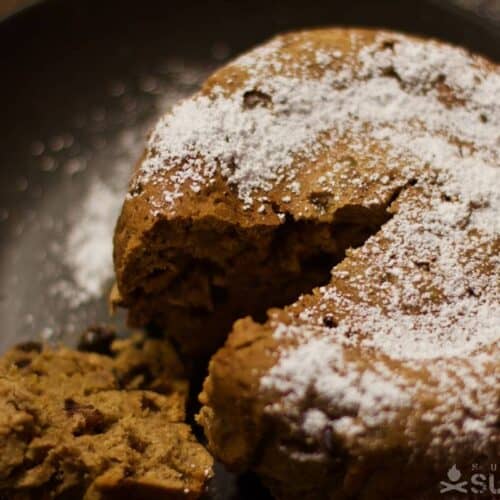 By all means, feel free to follow one of the original recipe above – or you can try the one below which I have adapted.

While staying very close to the original in terms of using readily available ingredients, and using the old British imperial measurements, as retained in the US, I have changed the method to boil the fruit and sugar first, then add the other ingredients.

This is the way I was taught to make basic fruit cake by my mom, but it is only worth doing if you are trebling on quadrupling the quantities as boiling a ½ cup of raisins or currants isn’t worth the effort. I also upped the quantity of dried fruit from 3 to 4 ounces.

If she was making a very rich Christmas cake the fruit was not boiled. That recipe required all sorts of cherries and nuts and candied fruit, plus brandy, wine and beer.

Yes, all three went into the boozy fruit that had to be soaked for three days before being incorporated with the other ingredients before being baked, but that’s another story.

We are concerned with a basic survival fruit cake, that actually has very little fruit – as the soldiers used to joke you could count the currants in the cake!

Trench cake is certainly not a rich fruit cake but it is certainly inexpensive and edible. How did it taste? Well the one I made from the basic Ministry of Food recipe was actually quite good with a cup of tea or coffee.

I found it best eaten fresh – like still a little warm from the oven, with some icing sugar sieved over the top. Perhaps to our 21st century tastes it’s a bit on the stodgy side, but let’s face it, during wartime and food rationing any kind of cake was welcome.

It was an absolute treat for soldiers used to living on the eternal cans of macaroni and bully beef – when they could get them. The fact that it was baked with loving hands and hearts (and sent across the sea to make life a little less bleak for a while) made it even more special.

Keep this recipe handy, and with the ingredients from your stockpile, you could cheer up the folks around you in survival situations.