[dropcap]I[/dropcap]n order to be able to answer this question, we must first define the terms. What is a Bug Out Bag (aka BOB)? It is a piece of luggage or other packaging designed and populated to support a person in the activity known as “bugging out”.

That term, “bugging out”, is based on military slang for suddenly being removed from a position that is likely to be soon overrun by the enemy and transported to a location that is thought to be safer.

In civilian life, it has come to be used for the concept of when a disaster strikes, leaving your home which is or likely will be at severe risk, and going to another location which will hopefully be safer.

It is also used, incorrectly, for leaving your home that is or likely will be at severe risk, and going “somewhere else” without a good idea where that is. This is not “bugging out”. The technical term for this is “fleeing”.

“Bugging In” has no intrinsic meaning. If a person is familiar with the term bugging out, it can infer the sudden and dangerous nature of the event, but the action is to “do nothing” and just stay put. Since we as a culture are happy to ignore language purity, the term is commonly used these days to denote the opposite of bugging out.

In logical terms, “bugging in” is considered to be equal to “NOT bugging out”. That is, it refers to the intention of staying where you are during any emergency. These definitions give us the ability to answer the question.

Let us restate the question in the least positive way we can: “If I am not going someplace else, why do I need anything to assist me in getting there?” The answer to that question is based on the flaw in your concept of “bugging in”.

Check out the news about recent wildfires in California and other places, and note that buildings have been destroyed by these fires despite full firefighting efforts.

If raging fire is advancing on your location, are you really saying you would stay there to be burned alive? Particularly if the firefighting efforts are reduced or non-existent? If the floodwaters are rising, are you willing to drown?

If some government agency comes through and demands you leave or you will be shot, would you turn your back and encourage them to mow you down? If a nuclear power plant or chemical plant upwind of you fails and a cloud of radiation or toxic gas is headed for you, are you really planning to stay in it’s path?

There are many things that could make staying where you are a death sentence. Cases where you either leave, or die. If you don’t mind dying, why are you reading “survival” literature? “Survival” is “not dying”, by definition.

You have to understand and accept that even though you PLAN to bug in, you may be forced to bug out, which means that you need to have the equipment to be able to do so. So yes, you do need to have a Bug Out Bag even if you plan to bug in, and you should now know why.

However, the odds are pretty good you CAN’T “bug out”. You would have the need to leave where you are because it has become too dangerous, which is the first half of the concept. Since your plan was to NOT bug out, you probably don’t have a location to which you can bug out.

Without this second part of the concept, you would not be bugging out; as mentioned earlier, you would be fleeing. In order to maximize your chances of success in either situation, you not only need to have a BOB or equivalent, but have it readily available. This means ready to go at an instant’s notice, not “everything you need is somewhere around and you can build a bag if necessary”.

I call a “fleeing support” bag a GOOD or Get Out Of Dodge bag. For all practical purposes, it is the same as a BOB, just without a known destination or schedule guiding its contents.

It is a “general” solution for the off chance you will be forced to leave your “bug in” location. “Ah” you say, “I’ve got a trailer with most of my stuff in it, so if I really do need to leave my fortress, all I need to do is grab a few things, hook up the car, and take off.” Great! Sorry, you still need the bag, though.

Ever been on the road during “rush hour”? Going slowly or even stopped by the mass of vehicles going the same direction, at the same time? With people as normal as they ever get? Imagine people fleeing, panic-stricken. What do you think the odds are that the roads remain passable?

I suspect that under emergency conditions, roads will quickly become jammed, and panic-caused accidents will abound and block the roads, turning them into permanent parking lots.

If you have maintained your bug out vehicle in top condition, and are not forced to drive through damaging conditions and have even a bit of luck, your vehicle has a good chance it won’t break down. But absent those conditions, the odds of your vehicle breaking down go up. Maybe you can get it going again, maybe you cannot.

People in government, who despite probably being a major part of the cause of whatever disaster occurred, think they know better what to do with you and your stuff than you do. People who think God is punishing the Earth, and if you don’t follow that particular god, you are the “enemy” to be killed, and your stuff is blessings from their god.

None of those modes of transport will allow you to take all that stuff, and you probably won’t have time to select the best subset of that stuff, or have an effective way to carry it. Even in the best “bug out vehicle” imaginable, your BOB/GOOD should be ready to go and instantly accessible.

Bugging In with a Bug Out Bag

However, let’s say that you do successfully bug in. Then won’t the resources spent on the bag be wasted? Probably not. Keep in mind that the contents are specifically chosen to support the most important aspects of survival.

If the supplies and equipment you set up for bugging in run out or wear out or become lost or damaged or stolen, items in the bag may make the difference. Even if you don’t need them, they probably are among the most valuable barter items you can have, because a large percentage of the people will not be as prepared as are you.

The only way that a BOB can be a waste of resources is if no disaster ever occurs. I’d say the odds of that happening are low and getting lower each day. Like ALL preparations, a BOB is INSURANCE.

Is the money you spend on automobile insurance or homeowner’s insurance a waste if you don’t file a claim? Not hardly. Unlike THOSE insurances, many of the items in your BOB have an intrinsic value which you can recover if you don’t use them.

It is said, “No plan survives contact with the enemy”, and in this case, a disaster is the “enemy”. Whenever making a plan with potential harmful consequences if it fails, have a Plan B, and preferably even Plan C, D, E, etc.

“Bugging in” is a plan with an unfortunate number of ways it could fail, and having a GOOD/BOB handy is a couple of critical backup plans which should not be ignored. 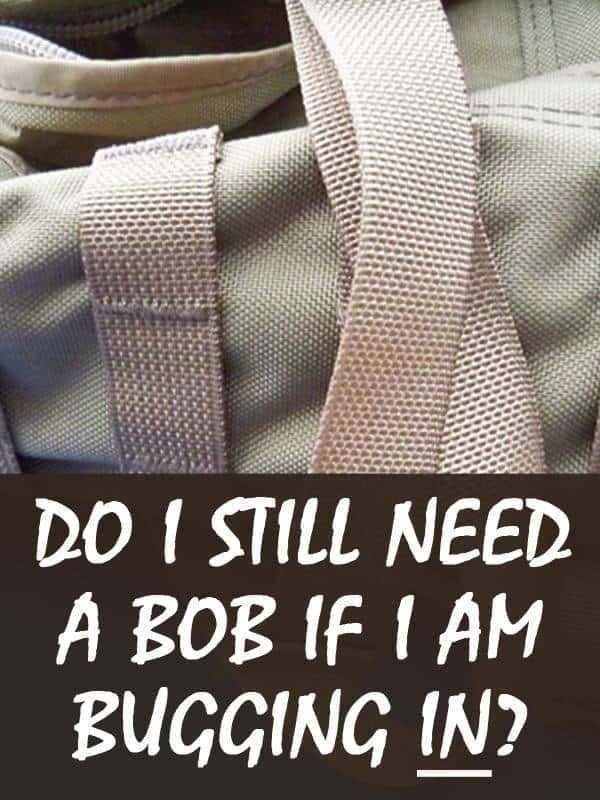 While employed at a major computer firm, I took advantage of a number of club activities and classes offered to employees, including martial arts, advanced first aid, photography, rock climbing and wilderness survival. It is my nature to “tinker” and delve into the technical side of things. As a kid riding bicycles, I learned bicycle mechanics. Knife collecting let to throwing and making them, as well as leatherwork for sheaths. An interest in firearms led to combat competition, reloading and gunsmithing. The martial arts led to knife fighting and making and using primitive weapons.

7 thoughts on “Do I Still Need a Bug Out Bag if I am Bugging In?”