Handguns For The Elderly

When we think of homeowners and firearms, we often think about a man defending his wife and kids. However, per the Census Bureau, by 2050, 1 in 5 Americans will be 65 or older.

A defense firearm for the elderly should be like those of any other home defense handgun. It should be reliable, easy to repair, as well as easy to obtain parts and ammunition for use. The most common ammunition in production is for the .22 LR, and 9x19mm followed by the .45ACP, .40 S&W, and .38 Special.

This guide is not an end- all, be- all for elderly firearms but in my experience the simpler the firearm the more comfortable a person will be. The goal is to provide a few options that could be purchased at most gun stores throughout the United States.

Glock is an Austrian company that has changed the face of firearms. Glock has created a series of polymer framed semi- automatic pistols built through years of exhaustive reliability and safety tests to emerge as the brand used by police and militaries around the world.

With all the mechanics of the firearm built into the slide and frame, Glock is one the simplest firearms to maintain and use. It weighs around 1.5 pounds unloaded, which could be a drawback for those who may not be as strong.

The Glock 19 is chambered within 9x19mm Parabellum, the most commonly used pistol around in the world thanks to NATO. Since all the parts of the Glock are internal, the ability for someone to have a failure while shooting is limited. While the Glock is not indestructible, it is as close to it as you can get.

The Glock 19 is also very reasonably priced. Compared to some of the top tier guns you may look at, a Glock 19 usually runs between $500 and $600 before taxes and paperwork fees. For a firearm that has not been changed much since its inception, Glock is one of the best values for your dollar and your piece of mind.

Read the full review of the Glock 19 here.

If the Glock is too big or heavy for you, you might consider the Kel-Tec P-3AT. Kel-Tec has many versions of their P Series handguns. The P Series comes chambered from with .32ACP up to 9x19mm Parabellum. The vast array of calibers makes it easy for a novice shooter to carry anywhere from 5 rounds (.380 ACP) up to 12 rounds (9x19mm).

The Kel-Tec handguns are designed to be light and easy to conceal.  The P-3AT is the lightest .380 pistol ever made. Weighing in at less than a quarter of a pound it is a great lightweight option. It is a semi-automatic, locked- breach pistol, and features a double- action- only firing mechanism.

The Kel-Tec P-3AT is a great value. Compared to some of the other handguns you may look at, a Kel-Tec P3AT retails for less than $400 before taxes and paperwork fees.

photo: the Glock 26, courtesy of Wikimedia Commons and user Fuzheado

The Glock 26 is also known as the “baby Glock”, and for a good reason. Weighing less than two pounds fully loaded, it’s a great fit for an elderly person due to their deteriorating strength. With a standard 10 (9mm) round magazine, the Glock 26 has enough ammunition capacity to increase their chances to hit their target.

In 1994, the world of concealed-carry was dominated by the 5-round snub nose revolver. Glock’s answer to this was the Glock 26, which has since been a highly sought after backup firearm for security personnel around the world. While this article isn’t for concealed carry, the Glock 26 is a great fit for elderly hands due to their small, light-weight design. 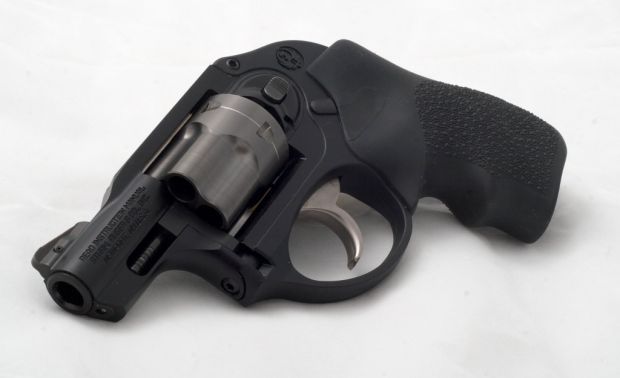 photo via Wikimedia Commons under the CC 3.0 license

If semi-automatic firearms are not your thing or you are simply a lover of revolvers (and there are many who fall into that category) you might consider the Ruger LCR or “Lightweight Compact Revolver”. Ruger has been around since 1949 and make some of the best revolvers in the marketplace today. The Ruger LCR has many versions and comes chambered from .22 LR up to .357 Magnum. The vast array of calibers makes it easy to carry anywhere from 5 rounds (.38 Special and .357 Magnum) up to 8 rounds (.22LR).

A revolver offers an elderly shooter a smaller and more compact firearm with a single action to perform: pulling the trigger. In times of great stress or fear, the action of only pulling the trigger could be the difference between life and death.

Many people are hesitant to purchase a revolver due to the external hammer, but this problem is easily solved since the LCR does not have external hammers. Weighing in at a little over a pound, the small revolver is light- as implied by its name.

Due to the variation between models of the Ruger LCR, one can run anywhere from $600 and $900 before taxes and paperwork fees.

While this is not an end all be all list of firearms for the elderly this is a good base for picking, testing, and finding a firearm for you or your elderly family member. Often they appear, as “soft” targets, for those would like to rob or otherwise harm someone.

We have to think about how they can defend themselves and not become victims. If you or someone you care about is elderly make sure you take the time to help them become trained to protect themselves. They will soon be one fifth of the population; we owe it to them to make their twilight years safe ones. Good luck and good shooting!

James C. spent four years as a Gunner’s Mate in the United States Navy. He served two tours to the Persian Gulf and played a role in the Operation Iraqi Freedom as part of the Global War on Terrorism. He has a Master’s Degree in Military History as well as an MBA. After leaving the Navy he married his wife, Krystal in Las Vegas and later joined the church in 2005. He and his wife have two daughters, Hannah and Emma.