[dropcap]I[/dropcap]t’s easy to take a flight of fancy and believe that you’ll be the lone good guy or good gal after the end, eking out a life in the remains and ruins of civilization. Yep. Just you, your people and the dog. And your trusty gun, of course, that you’ll use against the bad guys intent on pillaging. Of course.

Who are the bad guys? Oh, well they are those dirty dudes with the hardscrabble gear and flinty glare. The ones with guns and the big packs just waiting to be filled with loot from the unwary. The ones that keep to themselves and don’t act friendly. They look a lot like… Well, they look a lot like you, guns, machetes and all.

If there is one thing you can count on in a post-collapse situation, it will be the presence of armed people.

Those that survived the onset and aftermath of a society-ending (or even disrupting) event probably did so thanks to a knack for preparation, and lacking that they probably learned to love the battle axe quickly after seeing what the dregs of humanity had in store for the weak and naïve.

The presence of a weapon alone is not a valid reason to shoot or kill someone, not if you have any shred of ethics or sense left in your head.

So what do you do? How should one approach interactions with armed parties, or should you even engage in such behavior? It is hard to say exactly how much our human interactions will change after the SHTF, but it is best to start thinking now about how you’ll deal with a well-armed and very stressed-out world.

In this article, we’ll consider some options that will help keep you above room temperature when dealing with locked-and-loaded survivors of the big one.

An Armed Society is a Polite Society

This is a theory-based article, and so we’ll be making a few presuppositions: first, we’ll assume that things are not so bad and people are not so crazed from trauma or lack that strangers are being shot down or shanked on sight.

A situation like that will quickly turn all people in the area against anyone not already known to them thanks to a pervasive atmosphere of danger and hostility. If that is the case, keep it loaded and keep it close.

Second, we’ll assume that general patterns and markers of human behavior like posturing, emotional signals, physical cues and other pre-attack indicators will still be in play.

All of these things are filtered through a lens of social behavior, so as long as people are still interacting with any equity they will likely be present, and valuable indicators in discerning someone’s intent. After all, it is a no-brainer that the guy is actively going to try and kill you when he is drawing a bead on you with an AK or shoving a knife between your ribs.

This article will proceed assuming that there are still interactions between human beings beyond attacking one another. If you should find yourself in a scenario that violent, you won’t need the advice of this guide.

A few general tips for being around and dealing with armed individuals:

Things to Watch Out For

Any person or group obviously armed with guns and keeping a distance from other people or groups. Gunmen, especially skilled ones, want to use their guns range to maximum benefit and will try to keep from getting too close to people they are planning on shooting or may have to shoot.

A person who is relaxed or at ease will have less qualms about being close to others, especially familiars. Similarly pay attention to any gunman who is hovering next to good cover; he may suspect something or be planning something.

Any weapon in hand must be paid attention to, but nuance is important: a long gun held relaxed  in front of the shooter’s body with both hands is not as alarming to threatening as one that has the stock in their shoulder and the muzzle  halfway between target and ground (a classic low ready position, i.e. a pre-shooting posture).

Most people will not carry a pistol in hand unless they are anticipating using it; it will be tucked in a waistband or pocket at the least, or in a holster.

Any one hand knife or blunt weapon carried in hand better have a contextual excuse, otherwise consider that person a possible or even likely threat, especially if they are closing distance with you. Any ignored command to stop should be considered grounds for intervention.

A two handed bladed or blunt weapon is a little different, for instance, you cannot sling an axe most times. Pay attention to how it is held: an axe or bat over the shoulder or resting with its head on the ground projects less concern than one held in a classic two-handed “pre-swing” grip.

Be alert and ready to act instantly should anyone armed start looking around for “no reason” or fidgeting nervously with garments, gear or engaging in grooming behavior, i.e. touching their head, chin, face, etc.

Looking around may be a scan for witnesses, possible bystanders or their own or their intended victim’s allies. Anyone who blocks you movement or gets you to stop may be setting you up for attack. This goes triply true if you and yours are isolated or in a scarcely traveled area.

Read the temperature of a crowd when entering or exiting. If everyone is looking in one direction or focusing on a specific person or group, that’s a clue. If you see people giving any person or group a wide berth you should do the same.

Checking their eyes will sometimes betray their emotional state as well as who they are paying attention to, both important clues to intent. Then watch their hands. If someone is going to hurt you with a weapon they will do it with their hands.

The sheer amount of scenarios I could imagine where you would be crossing paths with or even meeting with armed people in a post-SHTF world are too numerous to even mention.

Most will boil down to interactions in populous areas or sparsely/unpopulated areas. As I noted above, context is crucial to determining your response, but that assumes you are still voluntarily interacting with others in a reasonably populated or well-traveled area.

If you are living in a remote area, a place well off the beaten track, you should be on guard with any “visitors”, visibly armed or not. This is an ethical conundrum for some but you have to ask yourself what someone is doing so far from other people and if it is really luck that led them to you. It is not out of the question to ask them to lay down any visible weapons or to keep their hands in the open at all times.

In more populous places where people mingle regularly, someone’s posture with the weapon will likely be the biggest tell to their intent. Slung long guns, holstered pistols and blades sheathed is good manners when around others the world over unless you are either on a job, about to use it or have cause to think you might need it. No reason to think that will change after the end of the world, so long as people still congregate.

In these well-traveled places, on ground you control you should still set yourself up for advantage when dealing with unknown persons, and this can consist of simply asking them to keep a respectable distance. Innocent and well-intentioned people may take umbrage if asked to disarm.

You probably would also, so it is up to you to perform cost/benefit analysis before doing so. If you have a group, your “cover” personnel can stay back a respectable distance depending on their weapon while a designated talker or “face” interacts with the unknown individual or their opposite number in another group equitably.

If you are a lone prepper, you will have to be far more cautious in any dealings not done in known meeting or public places. It will be simple thing for bad actors to ambush, sucker, roll or otherwise kill a single person no matter how alert.

You just will not have eyes in the back of your head to ensure safe interaction with a group and even one assailant will be a serious threat without backup. No man is an island, but you should be very cautious about placing yourself at a disadvantage if it can be avoided.

After the end, you need not treat every armed person you encounter as a hostile but you also should not believe them harmless, either. Much will change after the smoke clears and before the rubble is swept away, but basic human behavior will continue to betray people’s intentions to the practiced observer.

Take the time now to brush up on warning signals that precede an attack and start working on a plan for interactions that will suit your survival strategy. 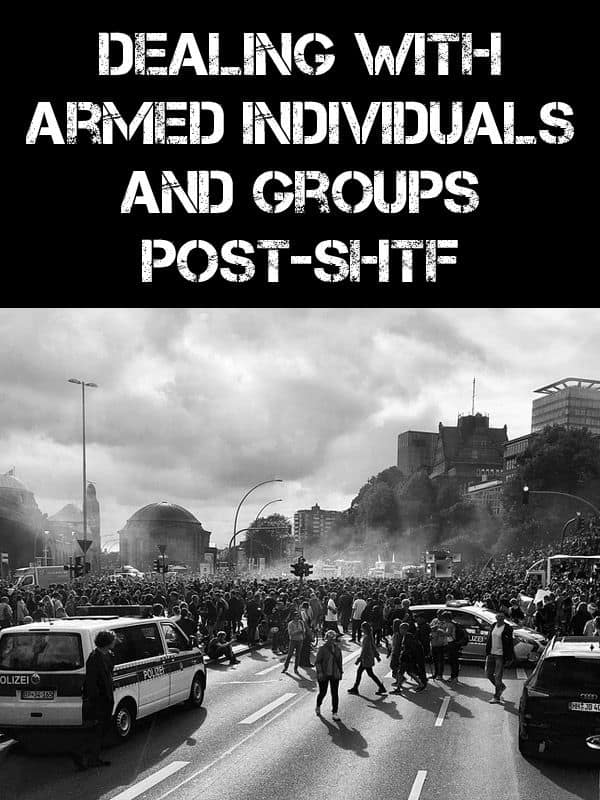 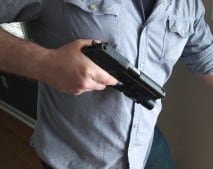 Charles Yor is an advocate of low-profile preparation, readiness as a virtue and avoiding trouble before it starts. He has enjoyed a long career in personal security implementation throughout the lower 48 of the United States.

2 thoughts on “Dealing with Armed Individuals and Groups Post-SHTF”