Cowboy stew was made on the trail during cattle droves that provides a fairly quick and easy meal after a long day in the saddle.

Cowboys working along or in pairs or threes would make it themselves, or if it was a big round up then the cook at the chuck wagon would make the stew.

Cook wielded enormous power – be rude to the cook or indulge in a spot of hazing at his expense and a cowboy could: a) go hungry or b) get something added to the stew that might give him the runs – usually some sort of horse medicine!

Cowboys wanted to be on the cook’s good side and would make sure his chuck wagon was set up nice and level, that he got what he asked for, and that they behaved when it came to time to dish up – also they learned never to complain about the food because a) or b) above could apply.

What Goes Into a Cowboy Stew?

Being outdoors and far away from farms meant that tinned goods or dry goods were taken along with potatoes and onions, which lasted fairly well to make the stew, which usually incorporated ground beef or beef chunks.

The beans served by the chuck wagon cooks would have been dried ones, soaked and then cooked for the stew, as carrying cans for an outfit of up to 20 men would have been costly.

The canned goods were used when cowboys were out on a trail with just one or two companions for a couple of nights and needed to cook quickly as unlike the chuck wagon cook then did not have time during the day to prepare food.

If they happened to be pass a homestead where they could get some fresh carrots or garlic these would be added. Most chuck wagon cooks would have had a little stash of bay leaves for flavoring, but if these extras were not around the food was still tasty.

When it came to herbs and spices the stew was pretty basic with just salt and pepper, unless the cook had decided to use some of the spices normally carried in the early days mainly for medicinal purposes – like nutmeg, cloves, and cinnamon, or had access to herbs.

In the Southwest closer to the border with Mexico the ranch hands would incorporate some chillis and other Mediterranean dried herbs if they could get hold of them.

These days cowboy stew provides a quick and easy meal and providing you have a freezer for the meat everything else can be obtained from your prepping stash.

Cowboy stew is a good recipe to perfect in case of power outages and other emergencies as it is a one pot meal requiring only one source of heat – a little gas cooker, open fire, or whatever system you have ready for emergency use.

Here’s how to make cowboy stew with Ground Beef to feed 6 hungry people. 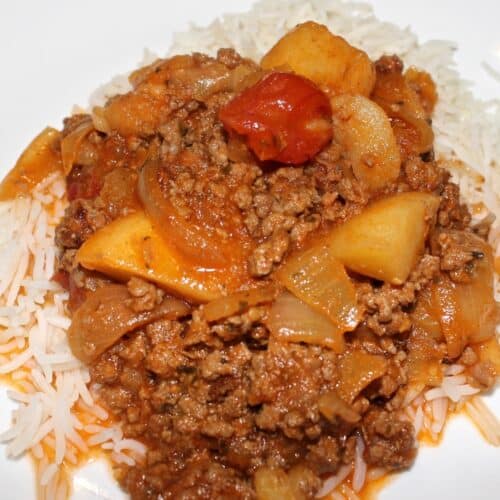 Cowboys on the trail who were separated from the chuck wagon for a day or so would have only one pot and may have omitted some of the steps like removing the onions and potatoes and simply added onions and potatoes first, browned them then added the meat and other ingredients.

Sometimes, the corn was omitted but the basics remain the same – ground beef, and beans, which are high in protein to put back the energy used out on the range all day.