Last night I wrote an article that explained how you can make a knife without forging. Tonight I will try to explain how to use that knife for stabbing attacks to the greatest effect.

This video shows the reality of defending against a surprise knife attack:

First off, let’s get realistic here, if you intend to use a knife to defend yourself (or to sneak attack and quietly take out that sentry if you’re all Special Forces /ninja sneaky enough to pull that off), there is going to be blood. It’s quite possible there will be a LOT of blood, depending on point of entry.

This video is hard to watch but it shows the lethality of a knife attack:

Now I’m going to get all medical here and tell you that regardless of what causes it, death occurs by hypoxia. Hypoxia is the lack of oxygen to the cells of your body. Without oxygen unconsciousness occurs, followed by death.

If someone dies from a blow to the head, most likely that blow damaged a part of the brain that controls the nerves involved in respiration (breathing) and/or circulation (blood flow through the body).

A blow to the head affecting respiration and/or circulation will cause death. Those are the two processes that distribute oxygen to the cells throughout the body.

Likewise, a bleeding wound that results in an amount of blood loss sufficient to deprive the cells of oxygen will result in unconsciousness and death.

Blood capacity is estimated to be approximately seven percent of body weight. So a 200 pound (91kg) human being has a capacity of about 14 pounds (6kg) of blood by weight.

Generally, a person can lose up to about fifteen percent of their blood, and have no serious ill effects. Once blood loss hits the forty percent mark, they are probably going to die if they don’t receiveblood NOW.

When a person dies from blood loss it is most commonly referred to as “bleeding out”, but the medical terminology for bleeding to death is exsanguination.

Now let’s put all of this together, a bleeding wound resulting in exsanguinationcauses death by hypoxia. Simple, but how can YOU cause that?

Get to the Point Already

Now that I have thoroughly bored you with the details of death by means of exsaguination, let’s look at some ways to cause it with a knife.

Generally, any device that is intended to be handheld and kill a human being is designed to make a hole to let blood out. A gun and a knife are the two most common devices for causing death by the letting of blood.

Today, we will explore the seven best places on the human body to strike with a knife in order to cause exsanguination.

We won’t go into detail about how to get the knife to that specific area, that’s up to you (or another article). We will just discuss the area and what anatomy we are accessing.

ONE-Stabbing the back of the neck at the base of the skull. The intended goal of striking this area with a knife is to sever the spinal cord/brain stem. Once the spinal cord is severed, all body function ceases.

This may seem to cause immediate death, as it will leave the person completely incapacitated. Unable to speak or anything, death will follow very shortly afterwards.This type of knife injury will produce virtually instant death.

Sounds simple enough, yes? Well, actually, it’s more difficult than it sounds. Oh sure, in the movies the hero grasps the bad guy by the forehead and shoves a knife or ice pick into the bad guys neck or skull,and wiggles it around and that’s it, bad guy is dead. Let’s take a look at reality.

The spinal cord is encased within the vertebrae (bones that make up the spinal column). Between these vertebrae are the intervertebral discs.

These discs are tough, spongy material that cushions the joint between the vertebrae. So when you insert the knife, you have to cut BETWEEN the vertebrae and cut through the disc in order to get to the spinal cord.

To do it, hold the knife with the blade held flat and the sharp edge towards the spine.

Stab deeply and firmly into the back of the neck,with the blade point angled toward the front center, then firmly yank the knife towards the spine.

TWO – Many of you are hunters, and probably have cut a deer’s throat to hang it and bleed it to help get the game taste from the meat, so you know just how tough that cartilage in the throat is.

Due to the toughness of that cartilage in the throat, your knife must be extremely sharp to cut deeply enough to sever the carotid artery. So making that happen with a quick slash isn’t likely (I don’t care what the movies show).

Because of this, rather than trying to slash the throat through that cartilage, it is better to stab straight into the neck to the side of the larynx (AKA Adams apple/voice box).

With the blade flat and the cutting edge facing away from the larynx, thrust the knife in with the point angled towards the center back of the neck (this ensures you are behind the carotid artery and jugular vein).

Now yank the blade sideways, away from the larynx. If you have a really sharp knife, it should exit the neck and cleanly sever both the carotid artery and the jugular vein.

You always see the movies talk about cutting the jugular; well, the jugular is a vein and is low pressure. To cause rapid loss of blood pressure, you want to hit the arteries.

THREE –  The next target we will look at is the armpit. How many times have you ever considered that as a target? Never?

Well, if you are fighting with someone, chances are they never considered their armpit a target either and so they will not be trying to defend it.

Inside the armpit is a large artery called the Axillary artery. This artery supplies blood to the arm and extremities (fingers). It is so close to the heart, if it is severed, blood will come a spurtin’.

The Axillary artery is not very deep at the armpit, and so it is fairly easy to access it. The only concern would be clothing. Is your attacker wearing a thick, heavy coat? If so, then you may have difficulty getting through all of the material.

But if it is warmer weather, and they are only wearing a t-shirt or other light clothing then consider the Axillary artery a target.

To access the artery, thrust upwards into the armpit with the edge of the blade facing back towards you then yank out towards you.

This should sever the artery and shortly render your attacker out of commission.

FOUR-Any deer hunter knows that when you shoot a deer, you aim for the heart and lungs. The reason why is that even if you do not get a direct hit on the heart, the lungs hold nearly one tenth of the total volume of blood in your body.

There are also a few large arteries that deliver blood to the lungs. A knife strike to the heart can cause rapid or even instant death.

Wounding the lungs causes them to fill with blood, and in effect, the victim drowns in their own blood.

When President Ronald Regan was shot, he was hit in one of his lungs with a .22. He nearly died, even with excellent medical care because his lungs were filling with blood.

If the lungs fill with any fluid they cannot perform their function of gas exchange for respiration, i.e. you don’t get any oxygen to the cells, and you die…

By holding the knife blade flat so that it will slide easily between the ribs, you can enter the lungs easily.

When someone has been stabbed in the lungs they cannot yell or scream in warning to others. If you are trying to take out a sentry, the lungs make a good primary target to allow you to set up a second strike.

FIVE – The liver is an organ located on the right side, front of the body. It holds blood in reserve and acts as a filter. It is also an excellent target for a knife attack.

As with a lung attack, hold the blade flat so that it will go between the ribs. Going between the second and third, or third and fourth ribs will most likely give a direct hit to the liver. Wounds to the liver are fatal if not immediately treated.

SIX--  The femoral artery is a major artery that goes through the pelvic region and down the legs. This artery can be accessed by stabbing into the groin area in the crook of the leg, and cutting down.

There will be rapid blood loss with this in jury if the artery is solidly struck. Death is inevitable without proper and rapid medical attention.

SEVEN – The Popliteal artery is an extension of the femoral artery and can be easily accessed by stabbing into the back of the knee. This artery is very close to the surface and will afford rapid blood loss if cut.

Not that I am saying to go out and try any of this. But if you plan to use a knife for self-defense, you should know where to strike with greatest effect.

You should also be aware that if you use this information you could find yourself in deep trouble with the courts, depending on the laws in your area.

However, in the event of SHTF or TEOTWAWKI then this information is VITAL for your survival. Not only should you know this, but you should also study anatomy to learn even more locations for slashing attacks as well.

For an attacker coming after you with a knife, this is where he will be aiming to harm you. This article can help make you aware of the spots to protect in such an attack on your person, as they can be fatal. 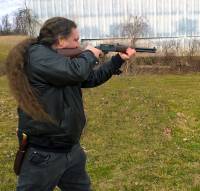 A skilled craftsman with a strong love for working with his hands, Eric spent 20 years as a carpenter and custom woodworker in high end homes. As a gold and silversmith he has created hundreds of pieces of jewelry over the years using the lost wax casting method.

The grandson of humble country folk, he was raised with the “do it yourself” mentality and so is accustomed to coming up with unique solutions to problems utilizing materials at hand.