When people climbed into their wagons to cross unknown territory in the interior, they had to be well prepared, as they didn’t know exactly when they would be able to get more of the basic ingredients to keep themselves fed.

For a balanced diet, the pioneers needed some carbohydrates besides the protein from fresh fish or meat, as well as either fresh or dried fruit and vegetables.

To solve the carbs problem, folks tended to carry rice and flour in the wagons. From the flour they could make bread, but it wasn’t always possible to stop to bake bread as this takes an hour or so, besides the rise time, so this is where biscuits came in – quickly made they could be made in under half an hour and served with a meal to mop up the gravy, or served with savory or sweet toppings.

A word about biscuits if you are not American. Biscuits in the US are what the British and other commonwealth countries would call scones. What the Brits call biscuits, are called cookies in America and are sweet (for example choc-chip cookies).

A warning here, it is very easy to get bitter-tasting biscuits if the proportions of baking soda to the other dry ingredients are not right.

If it says use butter then use butter and not coconut oil, Crisco, or margarine, as altering the ingredient ratios can result in failure.

The sodium acid pyrophosphate acts as a double leavening agent – the first rise occurring when the baking powder is mixed with a liquid and the second rise is in the oven.

This is why you should make the mixture, then get the dough into the oven sooner rather than later, otherwise the baking powder loses its strength, as the reaction tends to peter out after a while.

Many people prefer to avoid baking powders with the sodium aluminum sulfate component these days, as there is a move towards reducing this in the diet.

The monocalcium phosphate is also a leavening agent, but is not the same as cream of tartar (potassium bitartrate), which was previously using in baking powder, as it is a bit slower acting.

A common question is, “Can I use baking powder instead of baking soda?” Yes, you can.

Many older recipes called for baking soda, but if you want to use baking powder you will realize that there is less sodium bicarbonate in the mix so you need to adjust. Most sources suggest using three teaspoons of baking powder to replace one teaspoon of baking soda.

Now the pioneers didn’t have electric ovens to bake in, so the trail biscuits would have been made in a Dutch oven or large skillet,, but this took a while as you can only fit in a few at a time.

The Dutch oven would be placed over coals, with about 10 to 15 coals on top (depending on the size of the Dutch oven) fitting into that little lip on the lid, which is designed that way to keep the coals from rolling off, and distribute the heat evenly.

I am including two different pioneer trail biscuit recipes.

The first is the most basic, made with flour, baking soda and milk – I guess this was when the pioneers were down to the absolute minimum on supplies.

Then there is a recipe for when the cow taken along on the trail had sufficient milk, and they had camped out and had time to prepare buttermilk.

Many pioneer recipes used lard – rendered pig fat – for baking, but these days due to health concerns of using animal fats it is not used as much, even though 60% of it is unsaturated fatty acid.

If you are on a survival farm and have a cow you can substitute butter for the lard, but is should be unsalted butter. In the second alternative for pioneer trail biscuits butter and buttermilk are used.

I prepared both recipes, and baked them alongside each-other. You will see in the photos the differences in texture.

The ones with the buttermilk (or you can substitute full cream Greek yogurt) and the butter also cook to a more golden brown color and are light. The basic ones with flour, soda and milk were heavier and more densely textured. 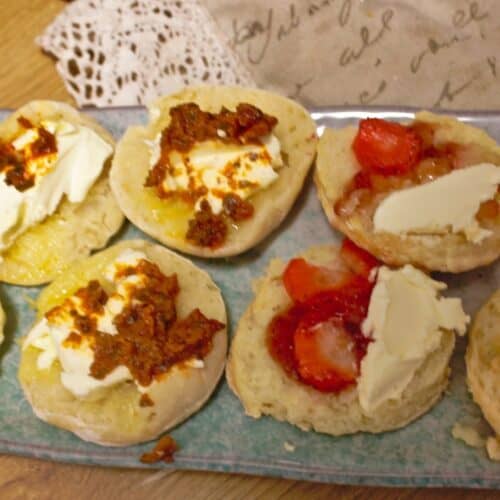