YOU WON'T BE ABLE TO GET THESE CRITICAL ITEMS POST-COLLAPSE. Click here to get the PDF
Skip to content
95shares

***DISCLAIMER: Neither www.survivalsullivan.com, its principals, owners, operators,  contractors or employees, or the author of this article, claim any liability resulting from injury or death resulting from the use or misuse of the information contained in this article. Any ammunition, once exposed to moisture, can function in a dangerous or erratic manner. Attempt to chamber or fire ammunition exposed to moisture explicitly at your own risk. ***

[dropcap]Y[/dropcap]ou’ve been up and on the move since 3:00AM. It was raining at 3:15AM, and it shows no sign of stopping. You found out shortly after 4:00 in the morning that your waterproof hooded jacket and pants, aren’t.

You are utterly drenched. Fate, it turns out, is not without a sense of humor; the large, fallen oak tree you planned to shimmy across over the river, the one that has lain in that exact spot for over a decade, has shifted in the rain-swollen river. Now you must wade across in water over your belly.

You do. Now, besides your shivering, the only thought you have is of your ammunition. Your rifle and optic, if quality, will hardly suffer from mere water, but your ammo; it has been wet, soaking wet, for hours. You know you will have to make the shot soon. When you go off-safe and take the slack out of the trigger, what will happen?

The answer is, “it depends,” and depends on many factors: rimfire or centerfire ignition? Rifle, pistol or shotgun cartridge? Is the cartridge of high or low quality? How long and how deeply was the cartridge submerged? Is the primer and crimp sealed, and with what?

I have long been on a quest to squash myths and old wives tales that swirl around guns, and their use, but this is one of the most confusing in the book. Ask this question at any gun shop, or range, or on any forum and you’ll get a barrage of anecdotal and typically conflicting stories about submerged and sunken ammo.

You’ll hear stories of amateur scientists submerging various makes and types of ammo in pools, ponds and bowls for hours, days or weeks, drying them out (maybe) and then attempting to fire them. Others will regale you with tales of ammo retrieved from sunken boats, or flooded homes, that worked, mostly.

There are legends of divers retrieving and later attempting to fire ammo pulled from sunken military vessels. Those and countless, somewhat less exciting tales of rainy hunts, soggy training days and amphibious military operations add to the results. Stories of treating ammo with commercial sealers, black or clear nail polish, and waxes of various types are frequent.

Can any of these tales be counted on? Who is telling the truth? What is the real story? How am I supposed to figure out if my ammo will work in wet conditions?! And how wet are we talking about here?!

Can I waterproof or treat my ammo for water resistance?! It is enough to make one crazy. Relax. As is often the case with most topics like this one, good data is tough to come by. The truth is, most of the people telling you that their soggy ammo functioned, at least mostly, are likely being honest. And those amateur scientists often make pretty good observations on their experiments.

But in order to cut through the all the conflicting opinions, I have gone to the source for official consensus on the matter: SAAMI, the Sporting Arms and Ammunition Manufacturers’ Institute. Founded in 1926, SAAMI is an association made up of the U.S.’s top gun and ammo makers. Their appointed task has been the publishing of industry safety, reliability and quality standards, technical data coordination and firearms safety and responsibility. They work by committee, and are stringently science based. Bottom line, SAAMI knows what’s up with guns and ammunition.

SAAMI specifies two conditions you should consider on exposure of ammo to moisture: 1.) ammo exposed to rain or dampness and 2.) ammo that has been completely submerged.

This is an important distinction. Most centerfire ammo is tolerant of being dropped on wet ground, snow or the like so long as it is a limited exposure, and is wiped dry in short order. This certainly fits my experience, and the experience of many other shooters.

Quality ammo will handle dampness in the short term rather well. One possible pitfall is the carrying of ammo in such as way that water may be trapped against it. If working in wet conditions, be sure your pouches drain well, or you are carrying the ammo, in magazines or not, in such a way that they will stay dry if possible.

Note here that SAAMI states rimfire ammo is far more susceptible to this level of exposure than centerfire ammo owing to their construction. Additional precaution should be taken to keep your rimfire ammo from getting even a little wet, or dropped on wet ground.

For my part, my own experiences with .22’s in wet conditions have been very good, although I cannot say I tried to fire any that were truly soaked. As far as centerfire cartridges, I have competed and trained during rainy days, on a dozen occasions, and never experienced a failure-to-fire malfunction I could attribute to ammunition getting wet either in a loaded magazine or in the gun.

This is admittedly a very small round count sample size compared to my fair-weather shooting, and my testimony should be taken accordingly.

Concerning ammunition that has been fully submerged in water, this is where all our variables mentioned above (type, time underwater, depth, etc.) start to rear their heads.

There are simply too many to give any meaningful standard or guidance on the matter. SAAMI lists further concerns, such as contaminates in the water separately affecting the priming compound or powder charge directly.

This is where things get dicey: it is completely impossible to determine, accurately and consistently, the effect that water has on any given cartridge. SAAMI, therefore, officially states that “no attempt be made to salvage or use previously submerged ammunition.” (Source: “Guidance on Ammunition That Has Been Submerged In Water, SAAMI, Inc., Sept. 8, 2016)

This does not mean a submerged cartridge will not function, or that it will function erratically, but it does mean that it may, and there could be unforeseeable consequences. A few are listed below, directly from SAAMI:

That is the official word from a collection of experts and scientists that make the ammunition we are talking about. I suggest you listen to them. That being said, what practical measures should you take when you anticipate your ammo may get wet, or you know you will be active in a wet environment? 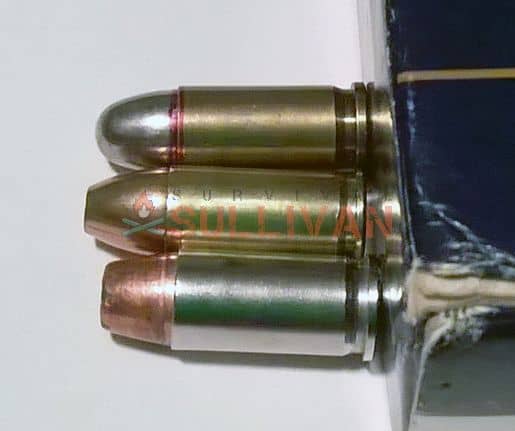 Generally, when concerned about the water resistance of your ammunition, consider the grade of it: higher quality ammunition is typically more resilient, and for longer, than ammo of lesser grade. Military surplus or true mil-spec ammunition is most often sealed or lacquered to prevent water intrusion, and can be the best choice for a very wet outing if applicable to your task. Ammunition suitable for military service is often fired after getting wet, even submerged for short periods, and expected to function. This is in no way an endorsement of such activity for you, reader.

Reloads or handloads do not seem to fare as well. I have observed similar sentiments on various forums, and among my professional associates. I do not use reloads myself except on rare occasions, but I have observed a few failures personally among shooters who subjected their reloads to rain.

This, of course, begs the question, was the failure due to water intrusion, or was the reloaded cartridge itself merely defective? We don’t know, and again, the variables are considerable.

You may be considering some chemical solution to try waterproofing your ammo. Products for the purpose have existed for some time, one of the most common by Markron. It seems to enjoy quite a bit of popularity among hunters, guides and handloaders.

Accusations have been made that it is simply rebranded nail polish and one should just use that instead, as that is another “time-tested” technique. To that, I say that traditions can often point the way forward, as our predecessors did sacrifice much to gain us the lofty position of knowledge we enjoy today, but just because something has been done a certain way for a long time does not mean it is not useless, or stupid.

At any rate, investigating the veracity of either of those claims would go beyond the scope of my expertise on such matters, so I will leave that up to you, reader, to investigate and decide if it is a viable solution.

One more factor you might not have considered is that of body sweat. Some us, your intrepid author included, sweat quite a lot during periods of high temperature or exertion.

If you are carrying concealed with ammo ready in body-hugging pouches or in pockets, I would caution against assuming those daily carry loads will last under such abuse forever. For this instance, there is even less good data than that on water immersion, but sweat is still moisture, and moisture is the emperor of corrosion.

You should be regularly rotating out your carry ammunition to ensure fresh loads are in the gun and on your person. And by rotating out, I mean shooting it off; I swap to fresh carry ammo no less than twice a year, or more frequently in hot climates.

Lastly, and I urge total caution on this point, if you working in or around a maritime environment, or any wet conditions frequently, you must be sure that your ammo is up to the task.

Gather any applicable data from the manufacturer, and then test it yourself to be sure. Exercise extreme caution when attempting to fire any cartridge exposed to moisture, especially one fully submersed. Seek the assistance of an expert for testing procedures. Take extra precaution that there is no water standing in the bore before attempting to fire.

If you are in possession of any ammunition that has been submerged and is suspect, or you want to dispose of, contact your local law enforcement agencies for guidance. Do not assume you can simply throw away any quantity of ammunition in the trash, as local laws and statutes vary.

We live in a time of miracles. Modern ammunition is as resilient and impervious to the elements of nature as it has ever been, even the universal solvent of water. But uncertainty must remain, and even expertly manufactured cartridges will eventually fail when exposed to water too long.

Nevertheless, our guns have accompanied us to every clime and corner of the globe, and given a measure of care, faithfully fire when called on, in rain, shine or snow. It is up to you, the shooter, to know the conditions, know the risks, and know what your ammunition will tolerate, and for how long. Assuming is not a strategy.

Take the time to think through methods of keeping your powder dry, and if you’ll be active in wet conditions, know what you can expect from your ammunition.

Have a good experience shooting in wet weather?  Perhaps a waterlogged cartridge failed you in time of need? Do you have any experience with DIY waterproofing of ammo? I want to hear from you in the comments. 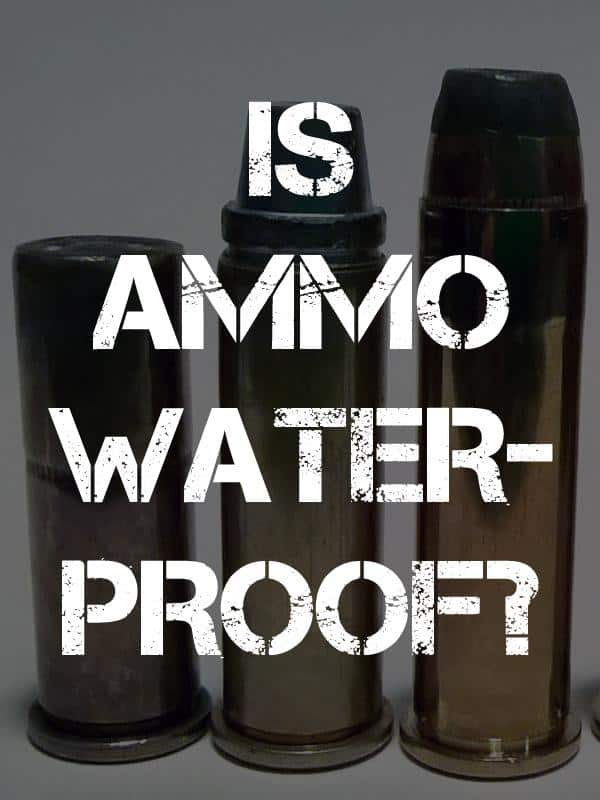 5 thoughts on “Is Ammunition Waterproof?”