3shares
In the event of SHTF or TEOTWAWKI, any kind of weapon that you can make to use for hunting or self defense will be a huge asset. Learning a skill like making your own weapons helps to ensure your safety and improves your chances of obtaining food.

This is also a valuable skill that gives you something that you can barter with if you care to do so. I wouldn’t give the other guy too good of a weapon though because I wouldn’t want them to be able to turn them on me. But a small crossbow for hunting small animals would probably be okay.

So, today we will make a mini-crossbow. This is pretty easy to make, it has about a 25-30 pound draw weight, and can be used for taking small game. So, let’s get started.

The more tools you have the better, but you could make this with just a sharp knife if you really had to, it would just take a lot longer.

The first thing to do is get the stock ready. If you aren’t exactly certain of the length just make it a little longer, you can always cut it off. I cut mine off twice and drilled the hole for the bow three times before I got it right. 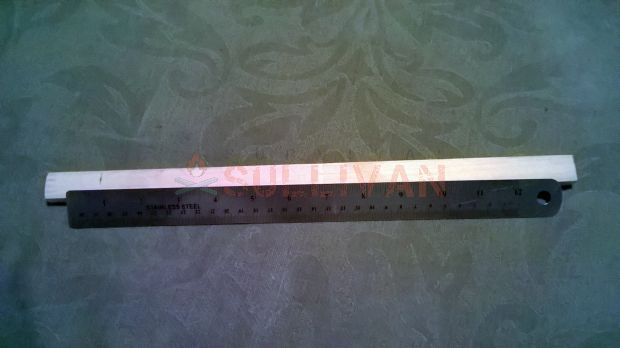 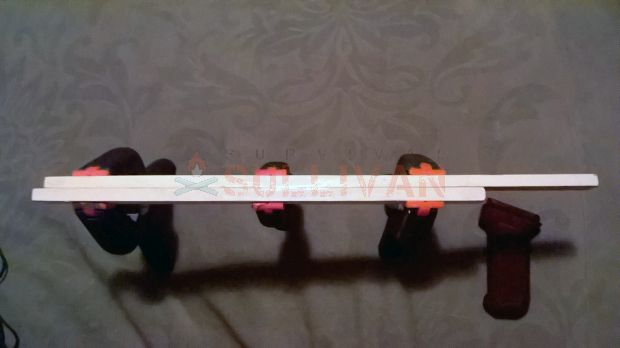 Next, cut the slot for the trigger. To do this just mark where it will go, drill several holes through the stock, then lean the drill back and forth to break through the holes into a slot. Finish the slot with a rasp or knife to make it neater. 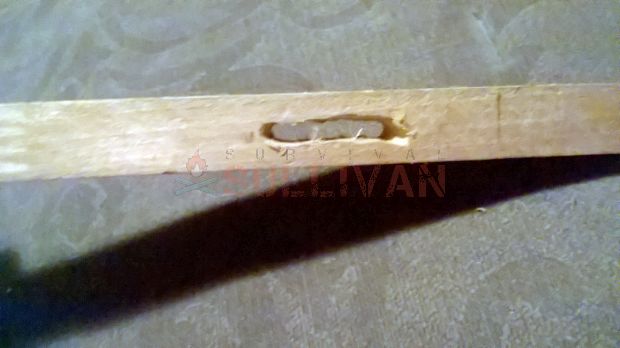 Mark the top of the stock for the bolt groove.

I cut the bolt groove on mine with a Dremel tool, but you can use the knife to carve it out if you have no other means. Like I said above, the more tools you have the better. 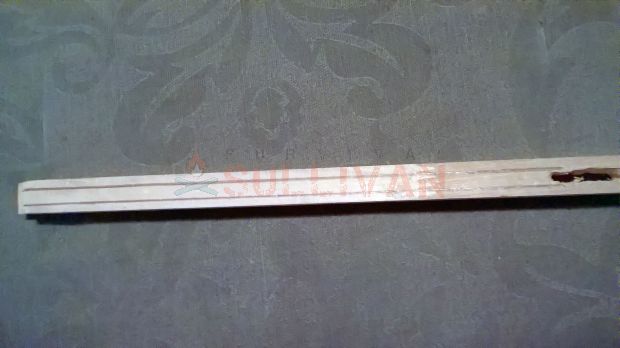 You need to make the trigger before you drill the pin hole for it so you will know where to drill the hole. To make the trigger first cut a pattern from paper. Test fit the trigger pattern, and make adjustments it until you think it is right. I still had to make two triggers because the first one wasn’t quite right. Then I made two correct triggers and glued them together with gorilla glue to make it stronger. 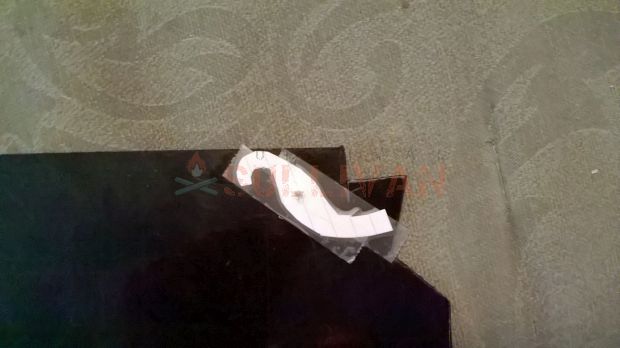 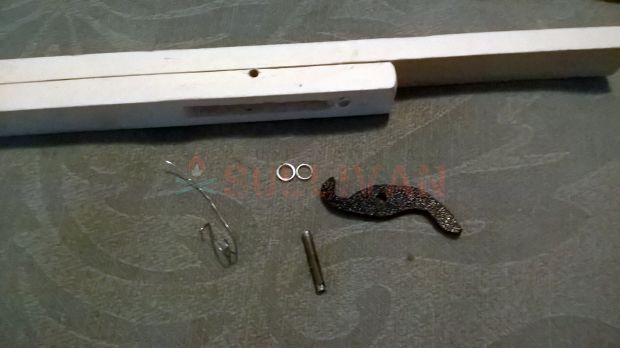 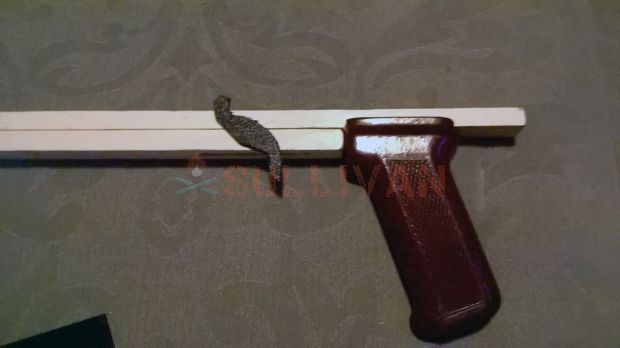 Drill pin hole and then install trigger and trigger spring. Use washers on the side of the trigger to keep it stable and centered if there is open space. 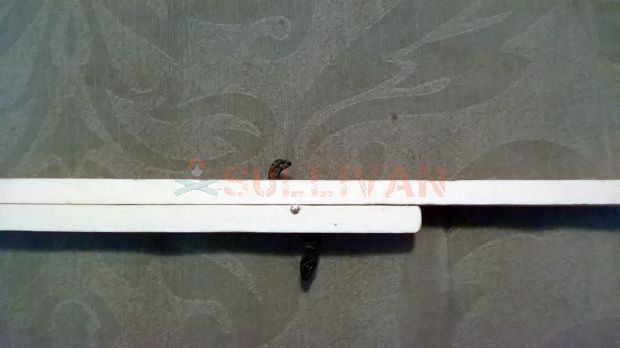 Now that you have the trigger installed you are halfway home. Next on the list, mount the grip. To mount the hollow AK 47 grip I used I put a block of wood inside it and a screw through the bottom to hold the block in. then I put a screw down through the stock to hold the grip on. 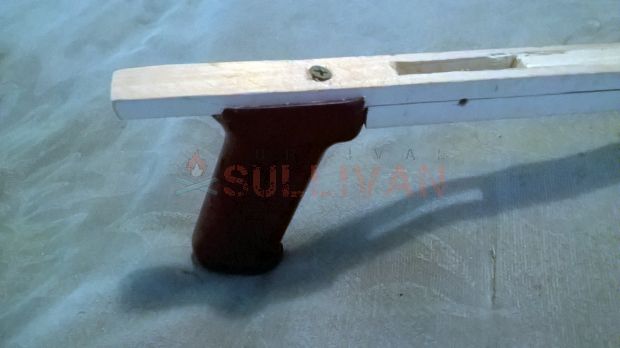 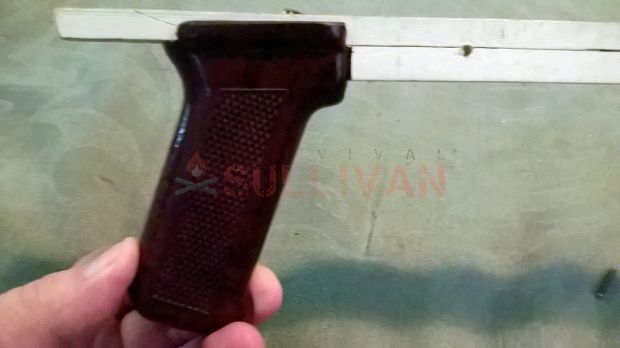 Next you will mount the bow. For this design I just used a simple fiberglass rod. To mount the rod/bow I just drilled a hole through the stock at the point where I thought it would work.

The first hole was wrong, the bow flexed and the string reached the trigger, but I heard creaking and didn’t want to the rod/bow to break so I re-drilled another hole about 1 1/2″ closer to the trigger. You can see the excess in the picture below, I just cut it off once I was happy with the position of the rod/bow. 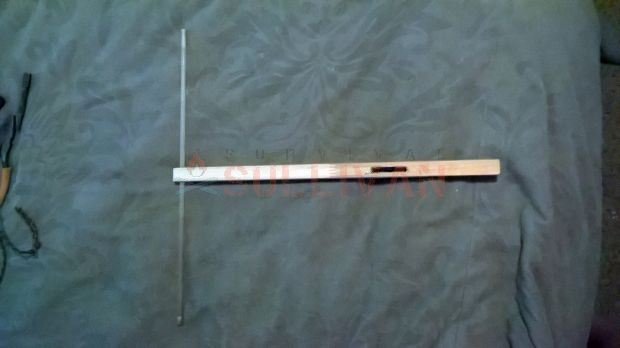 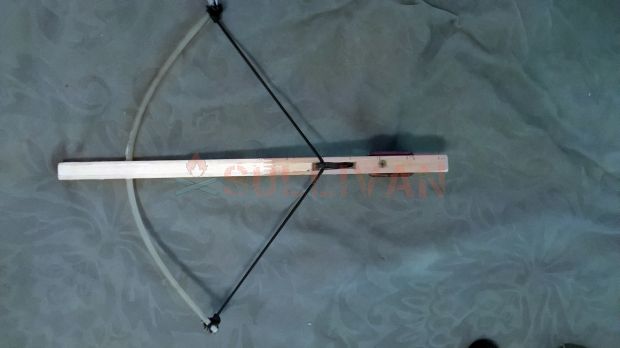 Once I had the grip and bow mounted, and the trigger installed, I finished cutting the bolt groove. Like I mentioned earlier, I used a Dremel tool to cut it. try to make it rounded on the bottom and like a half  tube for the bolt to slide through. I didn’t get mine as good as I would have liked to, but it works.

The more centered and well fitting you make the bolt groove, the more accurate the cross bow will shoot because it acts like a barrel for the bolt. Once you have the bolt groove cut you just need to make the springy part that holds the bolt in place when the bow is cocked ready to fire. Otherwise the bolt will just fall out. 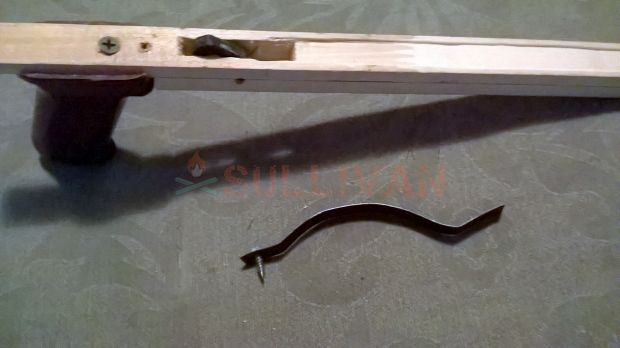 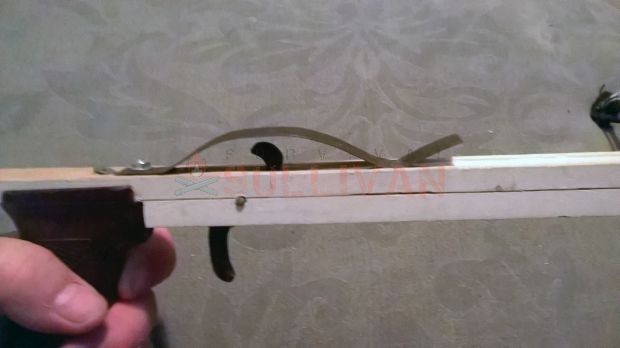 This part has to loop over the trigger and then lay on the bolt groove. You cock the bow by pulling the string under this spring and setting it into the hook in the trigger. Then you slide the bolt under the spring and the spring holds the bolt in place until you pull the trigger. 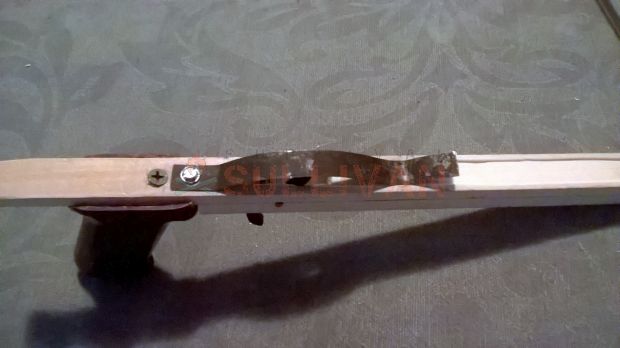 Now that the crossbow is done you need to make some bolts to fire from it.

Just like the trigger and bow placement, it took me a couple times before I got it right. The first bolt I made looked great, but it was too thin and the bowstring went over it. I made the point from a piece of galvanized metal and mounted it into a slot in the end of the bolt haft. Then I tied it on with dental floss and finally glued it in place. 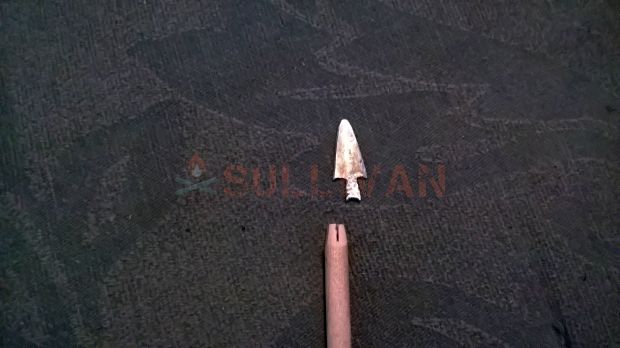 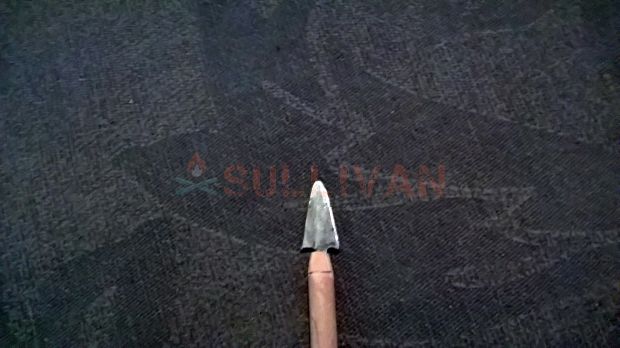 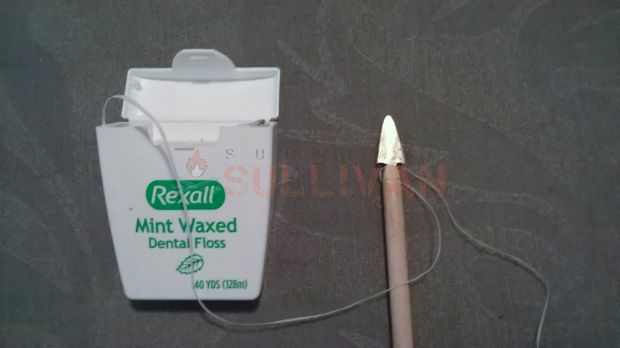 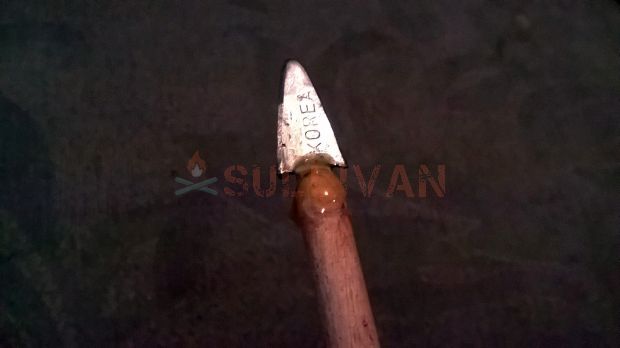 Like I said though, as good as it looked it was too thin and didn’t work. This is to be expected when you make improvised items. That’s sort of the basis behind being improvised; it means there are no technical drawings. I am just making it up as I go.

The next bolt I made was the same diameter as a regular arrow. I made a broad head point from a piece of galvanized metal and tied/glued it into the tip of the bolt shaft the same as the other one, it was just bigger. I then simply used duct tape strips to make the fletching. 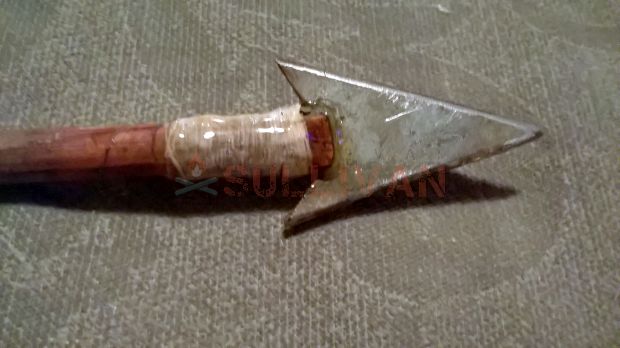 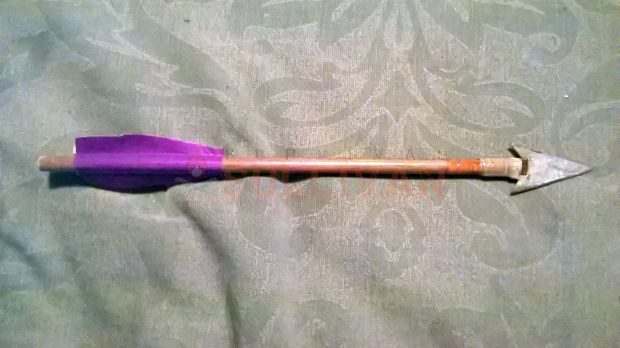 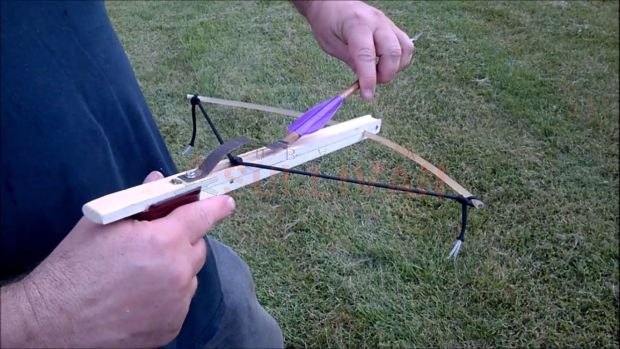 Demo vid: (plus more info on making the arrows):

When I finished the crossbow I took it outside to shoot it for the video. I fired two shots into the foam target and they hit with a nice THWACK! and wobbled the target back a little bit.

You could tell I was tickled with my new toy from the smile and giggle at the end of the video. However AFTER the camera was turned off something happened that I wish I had caught on camera. I wondered how far it would shoot, so I pointed the bow slightly up, expecting the bolt to barely make it the 75 feet or so the house.

I figured the bolt might make it to the edge of the wall and land in the grass. Instead it zipped in an arc and landed IN the gutter and with that same THWACK! Stuck in the asphalt shingles curled over the edge of the roof.

That impact was at about the apex of the arch so if I doubled that number it means the bolt would have flown 150 feet, or 50 yards, and I barely pointed it upwards. Now, I am in no way saying it would have any accuracy or do any great damage at that distance, but just that it made it that far and struck with as much authority as it did surprised me.

If it stuck in an asphalt shingle deep enough that I had to wiggle it out then I would say that it would stick in flesh. So that takes it from a small game weapon to a potential deadly weapon. If ten of you had them and lofted bolts in the general direction of a bad guy they could take hits, and the bolts would stick in flesh for sure.

Is it a great weapon? Not really. Would it take small game like rabbits? Yes, if you could hit them. Was it easy to make and fun to play with? YES, and it gives a good idea of what the full sized cross bow I was working on will do and we will look at that as soon as I finish it, write an article about it, and make a video for it.

Here is a video of a guy making a mini crossbow with Popsicle sticks:

I just had to show this guy. Poor Germans aren’t allowed to have real guns so this guy makes in sane toys, like this full auto crossbow. (I meant poor as in awwww, not as in no money):

Eric Eichenberger is an avid outdoorsman, skilled marksman, and former certified range officer and instructor with nearly 40 years experience handling and repairing firearms. A skilled craftsman with a strong love for working with his hands, Eric spent 20 years as a carpenter and custom woodworker in high end homes. As a gold and silversmith he has created hundreds of pieces of jewelry over the years using the lost wax casting method. The grandson of humble country folk, he was raised with the “do it yourself” mentality and so is accustomed to coming up with unique solutions to problems utilizing materials at hand.