Man Traps and Other Security Measures for Your Homestead

7shares
One scenario in the event of SHTF or TEOTWAWKI is that people will “Bug In”. This means that they will stay in their home which they will have stocked with supplies. One thing people who intend to Bug In need to consider is that they will need to fortify their home and property against intruders.

To harm or not to harm

To fortify your home or homestead you have decisions to make. Do you want to harm the person? Do you want to try to intimidate them to scare them away? There are ways to do both. Your traps should increase in lethality the closer the intruders get. Because let’s face it, if they step in a hole and hurt their leg and keep coming, then they aren’t here to be nice.

There are ways that you can create a secure homestead during SHTF or TEOTWAWKI without killing your fellow man. Although, at this point I think it’s only fair to say that if they tried once, they are likely to try again. If you leave them alive and they try several times, they will eventually succeed.

Their goal may then be in fact, to kill you to take your stuff, or just move into your home. So, you should consider that fact when you are preparing a security defense for your bug In home, AKA your castle. 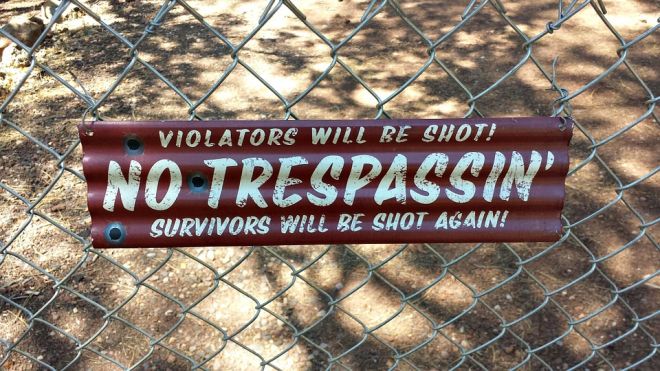 Warning signs stating that they are about to enter private property that is heavily guarded and fortified is fair warning before anyone crosses that line. If they so choose to continue then they are deserving of what’s to come.

Dogs are good to have around as early warning signals. They can bark whenever they see strangers, alerting you to their presence and give you a little extra time to prepare to greet them. If you choose to let dogs roam freely, then you probably shouldn’t use the other traps because the dogs could be hurt. Dogs also tend to keep game like deer away, so that is a negative mark against letting dogs roam freely.

You can have a fenced yard immediately around the house and let the dogs roam therein. That way, if you have man traps out away from your house and the intruders get through them, the dogs can warn you about them. You don’t need big dogs for this, but it helps. The intimidation factor of several large dogs around the house tends to cause many people to decide to look elsewhere.

If you have several people on your homestead, then you can use guards to patrol the grounds and perimeter. By using walkie-talkies to communicate, if they see anyone trying to come onto the grounds they will be able to observe. This way they will be able to find out if it’s just one or two people, or a dozen or two, then alert the rest of you to what’s going on. 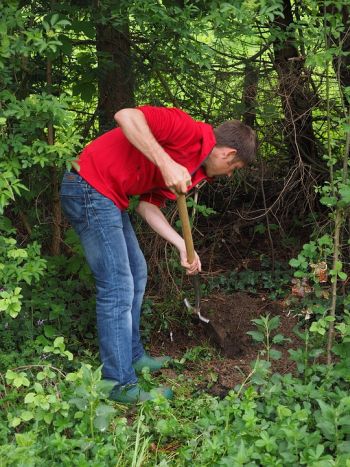 Man traps come in many forms. There are the simple ones like digging footfall holes around your perimeter. This is low cost because there are no materials. You just need a shovel or posthole diggers.

To put this plan into effect will take some work. If you have a tractor with a fence post auger on it would be ideal. If not, then get to digging.

You just dig holes about 14” in diameter and about 18” deep in a grid pattern a few feet wide in any vulnerable area where someone might try to come through. It won’t really hurt them too much. The worst they could get would be a broken bone or hyperextended knee.

Another non-lethal method of perimeter defense is to use an electric stock fence. If you run the wire about thigh high, it will surely be a shocking revelation to anyone who may wonder into it. These fences won’t kill anyone (unless you make them), but they will surely give someone the idea that there is someone there that doesn’t want them there.

Hit them with sticks

You can also make non-lethal traps by using piercing trap technology, but removing the sharpened sticks. For example, you can modify a tension trap that would ordinarily have two or three sharpened sticks on it intended to puncture the intruder’s abdomen or chest.

If you remove the sharpened sticks and raise the trap a little bit, you can redesign it to give the trespasser a good hard knock in the face (or on the noggin) instead of puncturing their lungs and heart. For that matter, you can make it so that it cracks them across the knees if you are worried that hitting them in the head might kill them. 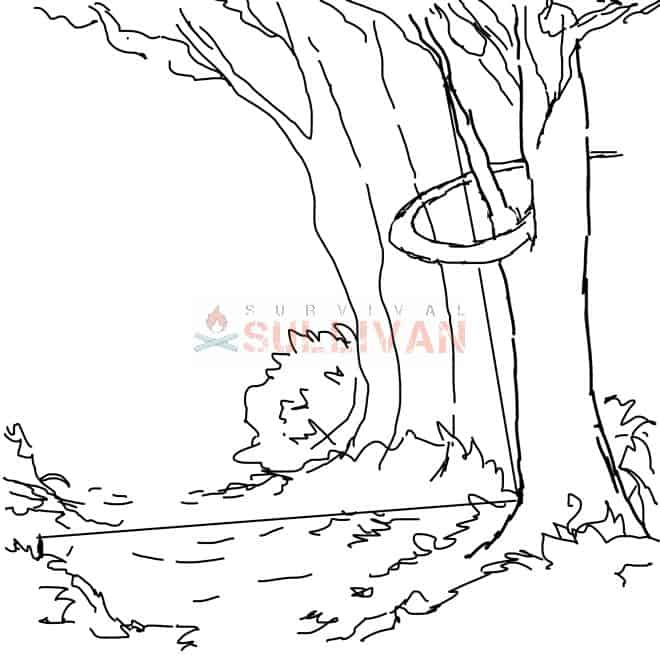 These types of traps won’t kill anyone. They might not even be injured very badly in them. But, these traps can be considered a warning to the intruder that if they proceed, things will get worse for them. Which they well should. Because let’s face it, if you make traps like this and the person keeps coming, then they can only have ill intent on their mind.

Kick it up a notch

If the intruder(s) come(s) past the first line of defense then you must assume that they have ill intent, and so you must increase the lethality of your traps. If at this point you still wish to not kill anyone if at all possible, then I would make traps that are intended to hurt or maim them. 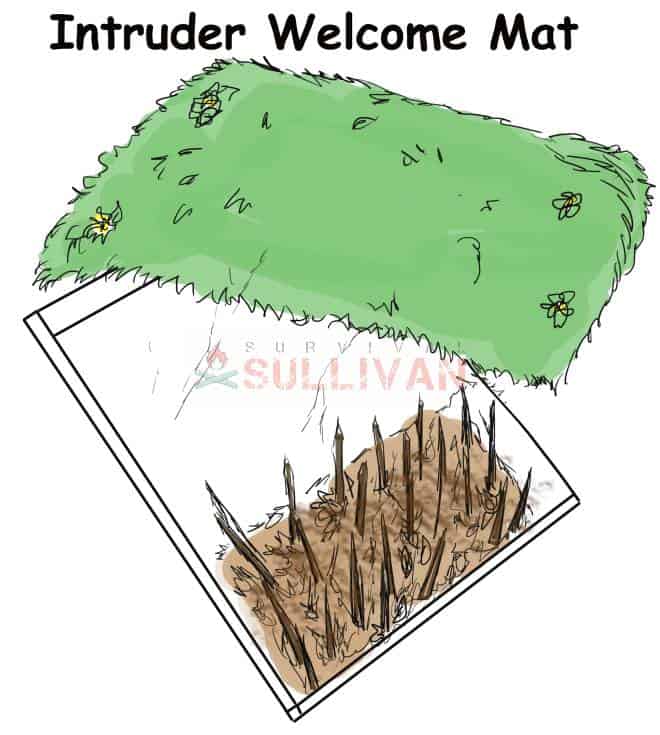 If you wanted to kick it up a notch, you could put a piece of plywood in the bottom of the holes you dug with rusty nails through it. If nails are a rare commodity for you, then a few simple sharpened sticks can turn your hole in to a punji pit. If you wanted to kick that up another notch then you know what to smear on the sticks or nails. If not, you can read here how to spice them up.

Here is some footage from Vietnam era punji traps:

At this level of trap, the tension traps should be stepped up a notch. They should be constructed so that they do have the sharpened sticks on them. However, they can still be situated to be non-fatal by orienting them to hit the legs or buttocks of the intruder rather than the chest or abdomen.

Here’s a video showing some of these types of traps used during the Vietnam War.

A deadfall trap is a device that when a trip wire is hit a large, heavy object (often covered with spikes), falls upon the intruder. This can be done by simply using a short piece of log, say 10-12” diameter by 18’24” long. Bore several holes in it and insert sharpened sticks into the holes, point out of course.

Hoist the log about 15-20 feet into the trees so it isn’t easily noticed. Fix a tripwire a few feet before the suspended log. This way when they are walking, they trip the release and then walk into the falling object. 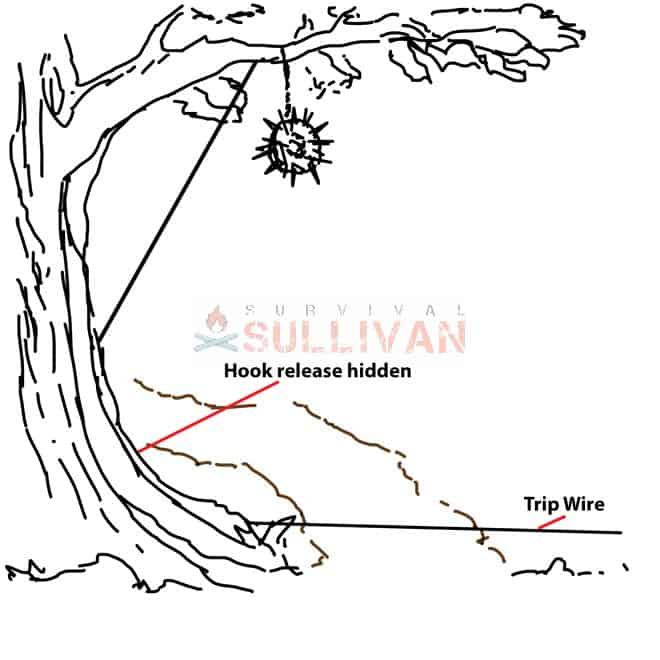 Another form of this is a swinging deadfall trap. It is made just like the other trap, except it is situated in the trees BEHIND the intruder on a pendulum. When the intruder trips the release the log will swing at them from behind, this way they won’t see it coming. 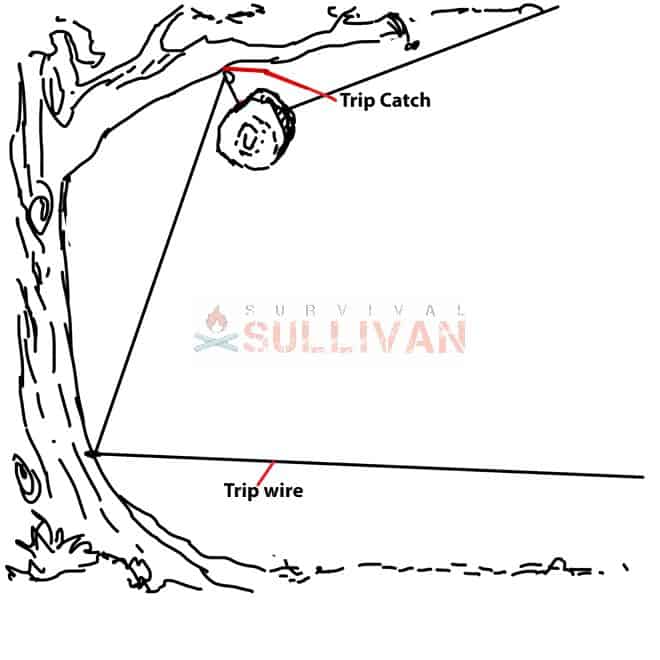 These often hit a person other than the one that tripped the wire if they are walking in single file. It doesn’t really matter who it hits though, as the psychological effect is the same on everyone that wasn’t hit. They will all become concerned about what lies in wait ahead.

You can also make these with logs about 6 or 8 feet long, so that it might hit more than one person if they are walking side by side. This type is much more difficult to rig and conceal though.

I know I keep talking about these but they are just so awesome. At this level of security, the shotgun shell is situated at about chest to head level. If you want to make a really vivid impression on any intruders, set the trap to send a volley of shotgun shells when the wire is tripped.

A half dozen 000 buckshot loads going off at once and leveled between 3 and 6 feet off the ground will make a mess of several people. Imagine if they all hit just one guy.

Regardless of whether you prefer to utilize non-lethal defense of your homestead, or if you plan to have a lethal perimeter set up. Keep in mind that this IS your home. You have the right to defend it when society is in full swing, so you damn well better believe that you can and will if society collapses.

NOTE OF CAUTION: Be sure though to keep your loved ones in mind. Make certain everyone knows where any traps are, so they can avoid those treats left out for others.

Eric Eichenberger is an avid outdoorsman, skilled marksman, and former certified range officer and instructor with nearly 40 years experience handling and repairing firearms. A skilled craftsman with a strong love for working with his hands, Eric spent 20 years as a carpenter and custom woodworker in high end homes. As a gold and silversmith he has created hundreds of pieces of jewelry over the years using the lost wax casting method. The grandson of humble country folk, he was raised with the “do it yourself” mentality and so is accustomed to coming up with unique solutions to problems utilizing materials at hand.